by nigeriagrasrootnews
in Community News
0

A member of the National Youth Service Corps, identified as Augustine Bassey, has on Monday lamented over the indiscriminate disposal of wastes at Atan-Oba Street in Offa Local Government Area of Kwara State.

Speaking with the Nigeria Grassroots News, the corps member said: Since the time I came to Offa here where I was posted for my compulsory one-year service to humanity and the nation as a whole, I observed that it has become a normal routine for them to refuse anyhow on the streets. For me, it is not good. Water taps are laid underneath the ground and they got busted sometimes. Whenever this happens, the water would either be unable to flow through properly or get contaminated for human consumption.”

When asked what they could do to curb the hitch, Bassey called on the Kwara State Government to rise up against the situation that has been affecting business owners who operate beside the place.

“In Calabar where I come from, we have people who used to come and pack these refuses. The Kwara State Government should do this too or if they have it before, they should ensure its enforcement. You can perceive the malodorous stench too, it is not helping at all. People have neglected this place. Cars can’t pass the place again especially during rainfalls like this”, he added.

However, he called on the community members to put a little efforts before the government come in to assist, adding that it is for the sake of their personal healths. 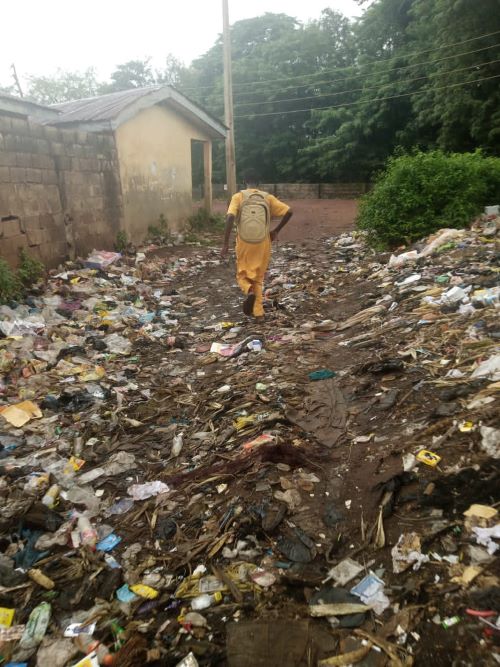 In his words: “The people can do something on their own too but heaps are much. Government should a means to take the things away. But the community members can burn it too or try to stop anyone who comes to dump refuses in the area again. If anything is not done, it will greatly affect their health, cholera will be much. I pity the young children.”

When reached, a collector with the Environmental Department of the Offa Local Government Secretariat Offa, who simply gave his name as Mr. AbdulRasheed told our Correspondent that there are agency created for the purpose of keeping Offa and its environs clean in the past but internal clash has razed it down.

“Internal scuffle can’t make these collectors work again. You’re seeing those wastes there because they’re not packing it as they do before. The residents have been complaining to the ears of the government since, it is just nothing is done.”